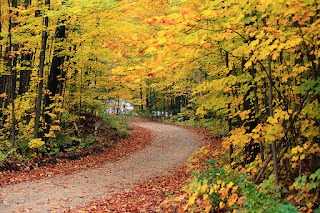 All of us are on our own, so to speak, when it
comes to the paths we travel and where we end
up. Along the journey, it's the decisions we make
that lead us one way or another.

The funny thing is that very often a simple decision
changes everything.

This week we get an update from Alison Kurek of
SilentMyloStudio. She shares some good news and
some great insight about some of her decisions along her journey.

There are things to learn here and of course this is a chance to help support our fellow team members!!

How has the beginning of the craft show season been treating you?  I don’t feel that my season has really started yet. I did 5 little Spring shows but those don’t really count :-) Spring shows are BAD for me, but then, I’m really not the exception to the rule there -- a lot of people do bad to mediocre at Spring shows -- I just did extra bad at some of mine.
One true success of the Spring season was the Junior League’s Decorator’s Show House. If you’re not familiar with it here’s a link:www.jlbuffalo.org/?nd=show_house I applied to/was selected for the gift shop and they sold about 90% of the stock I gave them. They are very particular about what they want and will accept ONLY the stock they request. While I understand why, it’s a little frustrating. Had I been able to give them more stock I’m pretty sure they would have sold it. As it was, my sales at the shop were double what I had sold at all 5 Spring shows combined. Even with the 40% commission, my actual income was higher than those 5 shows combined.My low point of Spring was getting a rejection from a show I’ve done for about 15 years, the Clothesline Festival in Rochester. I was pretty surprised by the rejection! I have no idea why I didn’t get in and was frustrated that, when the rejection letter arrived, it was about a week too late to apply to an Ohio show that I’ve been eyeing up for that weekend. Not doing that show could be the equivalent of someone else being laid off for the month of September - ouch! But, shocked or not, I allowed myself to sulk for one day and then thought about how I’d replace that lost income. (I can, in part, thank the Creative Thinking Seminar I attended at UB for that.) So -- I used some of the money that I would have paid for that show and ran a Facebook Ad to try to bring more LIKES to my business page -- which will hopefully drive business to my Etsy shop later this year. 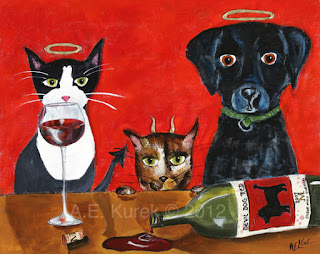 Update as of 5/28/13   I forgot to mention -- and it illustrates the difficultly and unpredictability of trying to make a living on art shows. I think I mentioned that I had been wait listed for the Cain Park Arts Festival in Cleveland Heights. It's a small (150 artists), pretty competitive show. Well -- I got a phone call from them and I'm in! The funny thing is, the images that got me into this small, competitive show were almost the same images that got me booted out of the much larger (450 artists) Clothesline Festival that I had done for 15 years. Weird! :-)

You have made a few videos so far that promote your art, can you talk about them - like how you are coming up with ideas for them and how are they being received?  I don’t know how I feel about the videos just yet. The whole point behind them is to get my work “out there” on the internet. I think many people like to buy products from people they like, people they feel a connection to -- so why not just talk to them through a video? The viewers get to know a little bit about me and my process -- and they can see that my work is not being mass produced in some “art Factory” in China.
I guess you could say they fall into 3 broad categories: 1.) Videos with me talking about what I do, 2.) Videos that feature my work, but I don't appear in, and 3.) Promo pieces for events (I’ve only made one of these so far.)
As for coming up with ideas, I pretty much just wing it -- with the exception of the video that shows step-by-step stages of one painting: www.facebook.com/photo.php?v=10201218617887528&set=vb.103158839507&type=...

I had a snappy Al Jarreau sound track attached to that video when I originally posted it. It was taken down within a minute and I received an “Alleged Copyright Infringement” email from Facebook, probably because of the music.

Friends have told me about copyright free music websites that I can pull music from -- and I will in the future, but right now I just don’t have to time to search for it.

When we spoke back in April, I asked what you would change if you could start again and you said you would have started off on your own sooner. Are there any other pieces of advice like that, that you would offer to someone who thinking about jumping off and going full-time with their craft?  I think I need to qualify that answer. While I sometimes beat myself up for: why didn’t I move to NYC when I was in my 20s, why did I work a full time job rather than focus on my art, why didn’t I........., the fact is, I don’t think I was ready to do any of that. 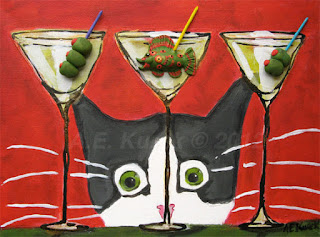 I’ve been making and selling my art for a very long time -- and I had sporadic small successes throughout my career --but I didn’t start seeing any consistent success until
about 2010.

I had started painting in 2008 and by 2010
things started to gel. In early 2011, I made my
first “Silent Mylo” painting (pictured at right), and then bought an archival ink printer. Had I been at that point earlier in my career then yes, I should have made the push that I’m making now -- but I wasn’t there yet.
I guess my advice to someone thinking about jumping off would be to really look inside him/herself and ask if the time is right. I think that, deep down, we have more answers than we think we do. We know where we are in our lives, what we really need income-wise, how our decisions will affect others. No one else can really tell you if your ready because they don't know all of the variables.

Next week we visit with Sarah Trumpp of Wonderstrumpet!!