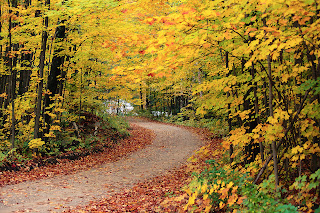 In 1937, John Steinbeck penned  "the best laid plans of mice and men, often go awry" in his classic
Of Mice and Men.

It still seems to be true, all these years later.

On the flip side of it, approaching things in a more relaxed, flexible way, must open us up to new opportunities and, sometimes, more success than we thought possible. It must help us eliminate worry and disappointment or at least reduce it. Right???

Well, Sarah Trumpp of Wonderstrumpet shares a personal breakthrough this week that just may in fact give this theory some credence. Check out Sarah's 3rd update on her march to success in 2013.

You've applied to a number of craft shows over the next several months. Can you update us on the latest?  I just did Mayday Underground yesterday (4/28) - it went okay as far as $$ goes, but it was hugely successful in the learning and figuring things out part.
In the past, I've mentioned trying to streamline and focus - this has been a HUGE stumbling block for me. I have spent way too much time and energy worrying about it. Looking back on the last few months, that's probably 80% of what I've been doing, which is ridiculous. I've had people I absolutely adore and respect tell me that what I'm doing is fine and I should just keep doing it, but it didn't feel right to me. But now suddenly everything has finally clicked in my head, which is AWESOME, and the booth setup caused it completely accidentally.
My husband made me a set of shelves to use on my tables, and I asked my oldest kid to paint them black for me. We just happened to be almost out of black paint, so I dug through our paint (I kind of went crazy at the paint department when we moved into our house) and decided on red, figuring I'd go back in and stripe them with white once he was done. That quick spur-of-the-moment decision has helped me immensely. I started walking back into the house from the garage, and the ideas started rolling.


I figured I'd make the shelves striped and grimy and then would make a tablecloth with grimy red and white stripes, too. Then the idea for painting and wall-hanging displays came to me, and I wanted them to be sort of side-show-esque, since my work tends to go in that direction naturally. I thought about them for a while and then designed and built them (when I should have been working on something else, of course), and they worked well enough but will be rebuilt this week (which is fine since I know what I'm doing now..). I made pennant flag bunting with random felt bits I had laying around (like anatomic hearts and sugar skulls), and it all coalesced into this circus vibe that I can totally work with. If only I could make a cotton candy machine! ;) 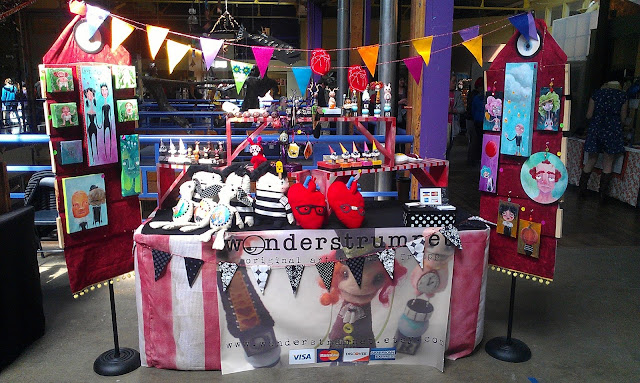 On the way home from Mayday, I started thinking about this even more and figured out a way to incorporate all of the totally random stuff that I make into one cohesive whole, and this is really exciting to me. I have this brain that needs to compartmentalize things, and it's hard for me to move forward when things don't fit into their little boxes (I'm going to go take a picture of one of my tables which illustrates this perfectly. My husband made them to my exact specifications - everything is in its own little compartment!). I know all of this worrying may sound crazy, but it has been a huge HUGE Atlas-style burden on my back.

I did get acceptance letters from the rest of the shows I applied for, so only Allentown denied me. I'll be doing Letchworth, Elmwood, Corn Hill, and Lockport. I'm freakingoutjustalittlebit but happy that I didn't get any more denials! 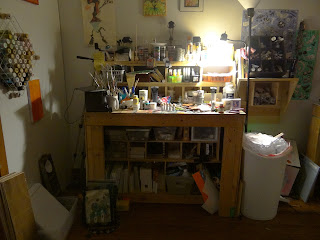 The first 4 months of 2013 have now passed us by. Can you share a high and a low you've experienced so far? The high was definitely all of the show acceptance letters. I feel like Sally Field in that Oscar speech = You like me! Although every time I make a sale (especially when the Etsy app is running on my tablet and it gives me a heart attack by screaming CHA-CHING!!! at me) it's a little burst of happy. The 80% of my waking hours being spent in this complete identity crisis has definitely been the low point. It's unproductive time that could be SO much better spent, but it needed to be done. That branding crap, it's apparently important.

What has a typical work day been like for you? Are you working more than 40 hours a week? Less?  I work every day, so definitely more than 40 hours, but it's hard to tell exactly how much more - I may have to start keeping track. My husband works out of town and is home about six days a month, and I have three kids, so it's kind of hectic crazy around here. I'm usually going full throttle from around 8 a.m. (unless I can drag myself out of bed earlier for some quiet time and yoga, which doesn't happen very often) until about 1:30 a.m.

Working from home - it seems like it would be easy for life to infringe on work - does that happen? Oh yeah it does for sure. Like I said, I have three kids, and they never seem to need something at the same time. Plus the laundry alone is mind boggling. It's also easy to get lost in the internet or whatever. My middle son turned 11 recently, and it was spring break, so I spent a lot of time playing games with him on the Xbox as his birthday slave when I should have been working. It's one of the benefits AND downfalls of working strictly from home. I have been doing medical transcription from home since that same 11-year-old was 3 months old, though, so I have practice


Some days, though, I have a REALLY hard time focusing and am constantly distracted or spend lots of time pacing around the house worrying. I'm trying to find a way to get myself out of doing that, so I've been making supplies and organizing and cleaning when I don't have it in me to focus on anything. I've been doing a lot of that over the last couple of weeks. Last night I decided to do a daily 'Today I Made...' post on my personal blog, just as a sort of accountability exercise. THAT's the hardest part of working from home - you aren't accountable for NOT getting anything done.. I mean, your boss isn't going to yell at you, you're not going to get written up, you're not going to get fired... plus on those days when I'm feeling extra hard on myself and have been pulled in 1000 directions, I can say "well at least I got that ONE THING done." 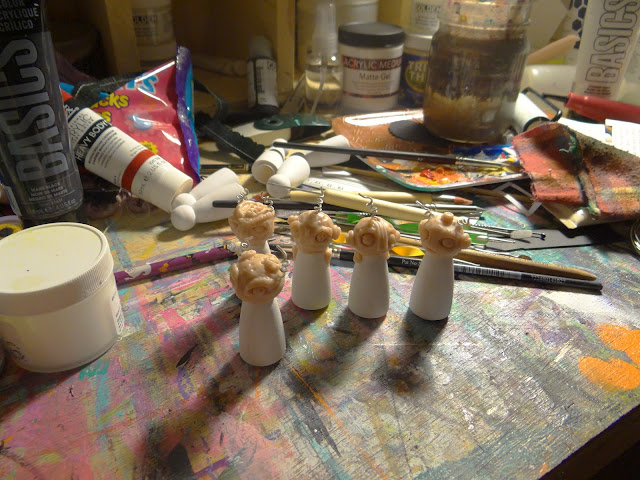 Visit Sarah and make her tablet Cha-Ching at Wonderstrumpet